The ideas behind Servant Leadership are ancient, but Robert K. Greenleaf is the person who first articulated them for our time. Greenleaf was born in 1904 in Terre Haute, Indiana at the height of that city’s robust participation in the Industrial Revolution. His father, George, was a wizard mechanic and machinist who also acted as a community steward. In his last published writing, Greenleaf said his father was his original model for a servant-leader.

Greenleaf attended Rose Polytechnic (an engineering school) in Terre Haute for several years, then transferred to Carleton College in Minnesota. He graduated as a math major in 1926 and promptly got a job with AT&T, then one of the largest organizations in the world. A teacher had convinced Greenleaf that large institutions were not doing a good job of serving individuals or the larger society, so Bob’s mission was to have a career of quiet influence of ideas from inside one of those big businesses. 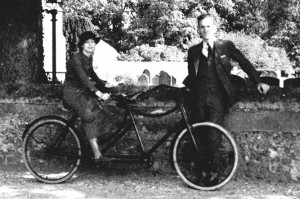 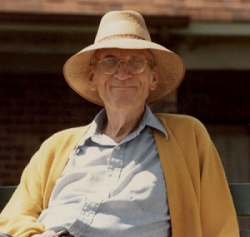 Greenleaf on his 80th Birthday

In 1929, Greenleaf was transferred to AT&T headquarters in Manhattan. He soon met and married Esther Hargrave, a gifted architect and artist who opened her husband to modern art, intuition, books he might never have read, and overall personal evolution. Greenleaf quickly rose in the AT&T organization, participating in its first management training program and traveling for five years as a troubleshooter for the more than 200 “Ma Bells” and other companies associated with the communications giant. He realized that the organizations that thrived had able leadership, with leaders who acted more as supportive coaches and served both the needs of both employees and organizations. As he succinctly put it: “The organization exists for the person as much as the person exists for the organization.” This was not a popular idea at the time.

Greenleaf contributed mightily to AT&T during his 38-year career there: Director of Management Development, originator of the world’s first corporate assessment center, promotion of the first females and Blacks to non-menial positions, a program to expose up-and-coming leaders to the humanities, even bringing in famous theologians and psychologists to speak about the wider implications of corporate decisions. Greenleaf retired in 1964 and began his second—and most productive—career as a writer, consultant, and teacher.

Greenleaf’s seminal essay The Servant as Leader was published in 1970. In it, he proposed that the best leaders were servants first, and the key tools for a servant-leader included listening, persuasion, access to intuition and foresight, use of language, and pragmatic measurements of outcomes. In the next four years, two more essays explored ideas that an entire institution—and a society—could act as servant, and that trustees should act as servants. In 1976, Paulist Press published Servant Leadership, a book that combined these and other essays. Greenleaf always claimed that although he was informed by the Judeo-Christian ethic (he became a Quaker in mid-life), Servant Leadership was for people of all faiths and all institutions, secular and religious. He knew that he was not a perfect servant-leader, but it was his ideal, and the arc of his life bent in that direction. 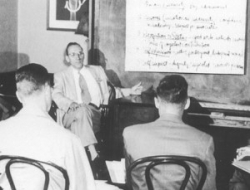 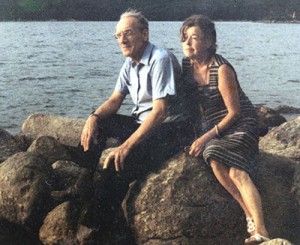 The Greenleafs during the 1960s

Along the way, Bob and Esther made friends with luminaries of their day like Rabbi Abraham Heschel, Norman Vincent Peale, Peter Drucker, Jungian analyst Ira Progoff, semanticist Alfred Korzybski, and hundreds of others. Bob loved to sing bass, attend lectures and concerts, play the recorder, read, fly giant kites, and take and develop pictures. His work and writings continue to have an impact on fields as diverse as systems thinking, management, leadership, organizational development, religion, assessment and evaluation, and a baker’s dozen other disciplines. Greenleaf, however, did not describe himself a philosopher, academic, theologian or writer, but as a businessman and a seeker. He died in 1990 and is buried in Terre Haute, Indiana, with an epitaph that shows his wit: “Potentially a good plumber; ruined by a sophisticated education.”