Winning Workplaces is busy gathering applications for Top Small Company Workplaces 2010. We’re preparing to carefully read them to determine a pool of finalists to provide to our panel of judges so they can determine the winners, which will appear in Inc. Magazine in June 2010.

This project gives us a perspective on the strength of small businesses throughout North America – an important barometer to gauge how well the economy is recovering from recession since historically over the past 15 years, according to the SBA, small employers have created over 60 percent of net new jobs.

As part of our analysis we have uncovered the following metrics. It’s important to mention that the data could change, as we’re about two weeks away from the application deadline of January 25. But here’s what we see right now:

Years in Business
The 2010 applicants have been in business for an average of 17 years. The youngest company is three years old (the minimum age to be eligible for recognition) and the oldest is 65 years old.

Average years in business comparison for applicants over the last four years:

Revenue Growth – 2007-2009
Over the past three Fiscal Years, the 2010 applicants have grown revenues an average of 151 percent. The lowest growth rate is -92 percent and the highest is 535 percent.

This is one metric that will likely level off to be nearer the growth rates of applicants in prior years by the end of this year’s application cycle.

Average number of employees over the last four years:

As with revenue growth, employee growth will likely level off to be nearer the growth rates of applicants in prior years at the end of the application cycle.

Employee Turnover – 2009
Average turnover among the 2010 applicants last year is 14 percent. The minimum is 0 percent and maximum is 45 percent.

Medical Insurance
Nine out of 10 (94 percent) of the 2010 applicants provide medical insurance. On average, those that provide it cover 79 percent of employees’ premiums and 17 percent for dependents.

Over half (59 percent) of the 2010 applicants practice open book management. Among those that do so, 53 percent also provide financial literacy training to their employees. 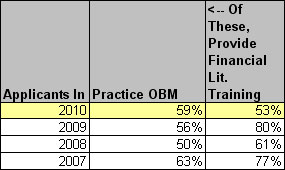 It is evident that the recession has impacted the 2010 Top Small Company Workplaces applicants most readily when it comes to revenue and benefits in terms of medical insurance coverage, especially for employees’ dependents.

The remaining steps in the selection process for Top Small Company Workplaces 2010 include: