Why I Believe in Servant Leadership 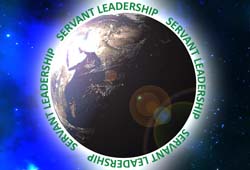 I believe in servant leadership because it resonates with mind and spirit and because it works.

Servant leadership is an unnamed whisper that has finally been named, a murmur that has always brushed the intuition of people of good will, sighing: “Everything counts—your life, family, work, beliefs and organizations. People count. Most of all, your love counts.”

Servant leadership is not Holy Scripture, although it draws from—and informs—sacred texts from every ancient faith tradition. It is not a religion, sect, fad, rigid theory or collection of scattered ideas. It is a coherent philosophy of mature, ethical and thoughtful living and describes the kind of leadership that ensues from such a life.

I believe in servant leadership because it is rooted in the universal human impulse to serve. That makes it a trans-philosophy: trans-lingual, trans-cultural, trans-doctrinal, trans-national, because the capacity for serving exists in all cultures and at all times. Those who translate that possibility into action change themselves first, and then the world. Don’t, however,  expect them to send out press releases about their good deeds.

I believe in servant leadership because it works. Its principles are finally being validated by a growing body of solid research. This development is necessary, but not sufficient to explain its appeal.

It also works because it feels right. It resonates in the body, like Michelangelo’s David, Da Vinci’s Mona Lisa, Shakespeare’s 29th sonnet (“When in disgrace with fortune and men’s eyes…”). We are not accustomed to thinking of Greenleaf’s body of servant writings as art, but in life he was an artist in multiple disciplines. Like all canonical art, servant leadership seems both strange and familiar when we first encounter it. And like all memorable artists, Greenleaf was midwife to a body of work that transcended even his own understandings.

I believe in servant leadership because our groaning world needs it. Now. Imagine the shift in consciousness and policies if even one country’s political system applied Greenleaf’s “best test” to measure government initiatives by their outcomes in health, wisdom, freedom, autonomy and servanthood.

Those who wish to embrace what Greenleaf called their “legitimate greatness” will step up and risk appearing wise fools by modeling deep listening, collaboration, persuasion, community-building, and concern for the common good rather than advocating actions that manipulate, coerce, cower, diminish, and control as first options. They will be accountable realists who recognize the dis-ease in people and institutions because they are bravely confronting their own shadows. They will use power ethically, yet admit that they are imperfect and sometimes act wrongly. They will be servant-leaders, clear-eyed, practical idealists who accept the risks inherent in following Kent Keith’s Eighth Paradoxical Commandment: “What you spend years building may be destroyed overnight. Build anyway.”

What thoughtful person would not want to believe in such possibilities?

Servant Leadership: A Virtuous Cycle of Service
An Afternoon with Robert Greenleaf