The Appreciation Paradigm of Grateful Leadership 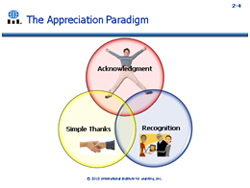 Grateful Leaders are those who see, recognize, and express appreciation and gratitude for their employees’ and other stakeholders’ contributions and for their passionate engagement, on an ongoing basis.*

When servant leadership was first introduced as a new and provocative model of leadership in the 1960s, I imagine many people asked themselves, “Why should I serve the people I lead? They should serve me!” And yet huge companies such as Starbucks, Southwest Airlines, and Marriott International adopted the philosophy and embedded it in their company’s culture. Similarly, as I was writing the book on grateful leadership, I knew many people would ask, “Why should I be grateful to my people? They should be grateful to me as their leader for giving them a job, paycheck, health insurance and retirement plan!” But I knew that if leaders expressed appreciation and gratitude, their people would perform to their highest capabilities, work with passion, and embrace a profound connection to their leader’s missions and objectives. Since then, I have discovered many grateful leaders; while some are reticent to step out and label themselves as such, the model for all of them is clear.

The foundation of grateful leadership is acknowledgment, and it plays a critical role in what I call the appreciation paradigm. All three elements in the model—simple thanks, recognition, and acknowledgement —are integral to the practice of grateful leadership. For example, most of us were taught to say “please” and “thank you,” and there is no reason to stop this simple, yet influential, practice when we get to the work place.

Recognition is basically appreciation for a person’s action – their efficiency, quality of work, responsiveness, and commitment. Companies may express the many forms of recognition through gift cards, peer to peer recognition forms, and other creative ways.

Acknowledgment expresses appreciation of a person for who they are – what you admire and what about that being inspires you. Often what you see in them, they may not see in themselves, which makes the awareness even more special.

I once watched a colleague sincerely listening to several of our present and potential customers at a conference where I was the keynote speaker.  The concentrated exchange between him and each person was riveting. Later, I told him how moved and inspired I was by his gift of authentic listening. In confusion he said, “I am just interested in what they have to say! It’s nothing special.” I told him that most people (myself included) are often planning their own response rather than focusing on the message. “You were totally present with each person,” I said, “And they came alive as they spoke with you!” In response to my acknowledgment, the young man seemed to grow about two inches taller and flashed an ear to ear grin. He was not aware of his gift and was thrilled it was acknowledged and appreciated.

During training I did at West Point with the U.S. Army, the distinction between recognition and acknowledgment was a dramatic breakthrough for military officers. They had all been recognized with stars and stripes, promotions, “atta-boys” and “atta-girls,” but not, they sadly realized, with acknowledgments. They planned to instill acknowledgment into their routines of leading their soldiers and to take “acknowledgment” with them on their future deployments and beyond.

The psychological benefits of grateful leadership appear significant. In fact, I have been asked to lead a pilot program this fall at Fort Drum in New York to prevent military suicides. People in key positions feel that acknowledging the unique characteristics and obvious sacrifices of soldiers might help prevent these tragedies.

I am deeply grateful to be bringing forth into the world the message of grateful leadership. And I know I have great allies in the world of servant leadership. In the preface of the first edition of The Case for Servant Leadership by Kent M. Keith, I was greatly moved to see these first words: “This book is about creating a better world.” Ultimately, that is what grateful leadership is about, as well. May we join forces and truly make the world a better place for all.

Food That Matters
Listen to Serve: Servant Leadership and the Practice of Effective Listening