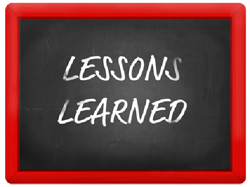 A few years back, I was invited to give several talks at St. Mary’s University in San Antonio, Texas. One of the presentations I gave was on the specific theme of the “Top Lessons I’ve Learned Over a Lifetime.” I was grateful to receive this invitation as it encouraged me to think about particular life lessons in servant-leadership that have had considerable meaning for me. These were my top six. Perhaps you may find generating your own list to be as thought-provoking as I did.

6.  Seek to understand others and listen carefully to what they have to say.
“Seek first to understand” is one of Stephen Covey’s Seven Habits of Highly Effective People. It means, in part, placing a greater emphasis upon truly understanding others.  Robert K. Greenleaf encouraged us to “listen receptively” to others. This is intense listening coupled with a genuine openness to the possibility of being persuaded by what others have to say.

4.  Recognize and understand one’s fears, then resolve to grow in your own bravery over time by gradually confronting and overcoming those fears.
Learn to understand what sorts of things scare you, and why. While most of us are afraid of something, we may be considered brave or courageous when we take action in spite of our fears. Letting go of your fears while growing in your own bravery is a very important life lesson.

3.  Leading is good. Serving is better. Serving then leading is best of all.
Part of Greenleaf’s great contribution to the world was the simple act of bringing together the words “servant” and “leader” in an innovative hyphenated word, “servant-leader.” In providing us with a name for something that many of us intuitively understand, he has helped to link together many who might otherwise have felt even more isolated in their beliefs and in their workplaces.

2. To the greatest extent possible, insist upon the right to make decisions that affect your own life, and support others in their own quests for those same rights.
This is another place where Robert Greenleaf’s ideas have great relevance—particularly around his encouragement of the use of persuasion as much as possible. Instead of telling others what to do, or what to think, I believe the world would be a happier place if we saved our admonitions for ourselves and expected to persuade others (and to be persuaded in turn).