SEEING THE LIGHT OF SERVANT LEADERSHIP 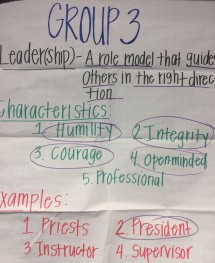 I am so very fortunate to work at an institution that actively strives to embrace, teach, and practice servant leadership.

The new year marks the beginning of another semester in higher education and, with that, a new crop of students who enroll in the Introduction to Servant Leadership course at Columbus State University (CSU). CSU is host to both an undergraduate interdisciplinary Servant Leadership Program, as well as a Master of Science in Organizational Leadership with a Servant Leadership track in our D.A. Turner College of Business. Servant Leadership is also one of the institution’s six core values.

Typically, the students who enroll in the undergraduate Servant Leadership courses are scholarship recipients or program participants. However, during the spring a section of the Introduction to Leadership course is open to any student on campus. We limit this enrollment to about 25 students and every spring we have a waiting list for the class. I mention this because every year I am surprised by the number of students who clamor to take this course.

Here is a sampling of the characteristics and the leaders identified by multiple groups:

The highlight of these few class periods is seeing the light come on as we talk about what distinguishes servant leadership from what I refer to as “plain ol’ vanilla” leadership. After studying four pages of definitions and comments about leadership, we typically land on Peter Drucker’s February 1994 quote in Fortune magazine: “Leadership is all hype. We’ve had three great leaders in this century – Hitler, Stalin and Mao.” While not in context from the Fortune article, the comment is a jumping off point for how to frame the uniqueness of servant leadership.

I don’t disagree with Drucker – he makes a good point – but I am not comfortable leaving it at that. Rather, for me, this is where the rubber meets the road. This is where I focus on Greenleaf’s definition of servant leadership and really see how it inspires others. The best test (of a servant-leader), and difficult to administer, is: do those served grow as persons; do they while being served, become healthier, wiser, freer, more autonomous, more likely themselves to become servants? And, what is the effect on the least privileged in society; will they benefit, or, at least, not be further deprived?

Today was a great day in class because I got to see the light truly come on for most of the twenty-seven students in class as we reviewed Greenleaf’s definition. I got to hear them make sense of the definition and begin applying it to their own experiences.

They are beginning to see that it is not all about who the leader is and what the leader does but about the meaningful relationship between the leader and the follower and the outcome of the leadership.

The Wisdom in the Room
PODCAST: Servant Leadership Sessions #6