I recently decided to have eye surgery when my ophthalmologist noted that the cataracts in both eyes looked “sufficiently awful.” He’s a funny guy. He and his Eye Wizards replaced the lenses in each eye. The procedures were almost comfortable—a piece of cake.

I expected the world to look brighter, and it did. I did not expect a breathtaking revelation.

When I walked outside several days after surgery, the vivid colors, especially the blues, made my eyes tingle. Strangely, my sense of smell improved with crisp odors; my entire body could feel humidity from an overnight rain, and hearing was enhanced. The experience really did take away my breath—and replace it with awe.

I recalled one of Greenleaf’s favorite quotes from William Blake: “If the doors of perception were cleansed, every thing would appear to man as it is, Infinite. For man has closed himself up, till he sees all things thro’ narrow chinks of his cavern.”

Science has an explanation for what happened here. All light reaches our brains by going through lenses in our eyes. Over the years, my lenses had turned dark and yellow, and yellow is a color that diminishes the blues. The process was so gradual I didn’t notice because I was seeing things from narrowing chinks in my cavern. (OK, Blake’s phrase is not science. Or is it?)

Greenleaf writes that heightened awareness is the key to listening, foresight, and even intuition. But awareness (which we may also call presence), and every other key capacity of servant-leaders can be diminished and colored by filters of personal shadows, traumas, hardened attitudes, distorted judgements, rigid worldviews, and just plain living. Greenleaf himself worked to broaden these kinds of limitations, but he paid special attention to what Quakers called moments—unexpected experiences of enlargement and grace that go beyond mere insights. Many who read The Servant as Leader for the first time describe AHA! moments when filters peel away, new connections appear, and something shifts to remake the world.

These strange times have helped many to see, not oversee, the dignity of people who serve—janitors, nurses, cashiers, truck drivers, millions who make our complicated society function but do not always receive services from imperfect systems struggling to respond. At the personal level, if you are “quarantine quiet” and receptive, you may courageously enter the depths and heights of your own intuitions that have been waiting to share their wisdom, and they may call you to unexpected growth as a servant.

It has been two months since I began to see again, but I still wake up every morning looking forward to a lovely world bathed in the colors of adventure. Perhaps this will become my “new normal.” I hope so. 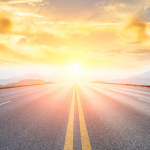 The Servant-Leader as a Trusted Advisor