Dear friends of the Greenleaf Center: 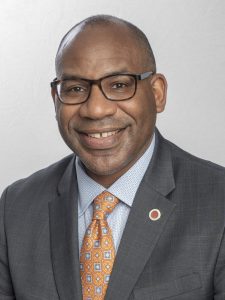 After an extensive and rigorous search led by Search Committee Chair Jeff Blade, I’m proud to announce that Reginald Lewis has been selected to become the new Executive Director for the Greenleaf Center for Servant Leadership at Seton Hall University, effective June 1, 2020.

Reggie brings an extensive background in the philanthropic, non-profit, state and municipal government, and higher education sectors. He currently serves as the Executive Director of the Newark City of Learning Collaborative (NCLC), a citywide, cross-sector post-secondary attainment effort working to build Newark’s college-going culture and increase the number of Newark residents earning degrees and other high-quality credentials. He also serves as an Assistant Professor of Professional Practice in the Rutgers University-Newark School of Public Affairs and Administration, where he teaches Servant Leadership in the Public Sector.

Prior to NCLC, Reggie served as Executive Director of The Chad School Foundation, Inc., a Newark-based education policy and advocacy organization that seeks to improve conditions in public school systems serving disadvantaged students. In addition, he has served as Executive Vice-President of United Way of Essex and West Hudson, Special Assistant to Commissioners in the NJ Departments of Education and Human Services, and City Administrator for the City of East Orange, New Jersey. As Administrator, he provided oversight of the municipality’s day-to-day operations and delivery of town services for nearly 70,000 residents.

His stints in philanthropy include positions with the Ford Foundation, Joyce Foundation, Victoria Foundation, and The Fund for New Jersey. While at The Fund, he co-edited Better Schools, an issue report that outlines strategies for improving New Jersey’s K-12 public schools.

I want to thank Pat Falotico for all her leadership and support of the Greenleaf Center during the past several years. She will continue to support the Greenleaf Center in a consulting arrangement to ensure a smooth transition and the success of several revenue initiatives.

Chair, Greenleaf Center Board of Trustees