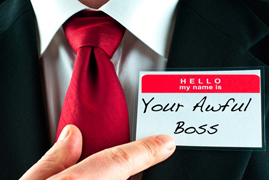 We are living in a bad boss reality. Are you doing anything to change it?

In November, 2012, Inc. magazine featured these statistics in a website article called Jerk Alert: The Real Cost of Bad Bosses by Maeghan Ouimet:

A casual scan of the headlines about “bosses” tells us as much as the statistics. Hating your job is the new normal:

There is an epidemic of bad bosses in this world. One recent report estimates that bad bosses cost the U.S. economy $360 billion per year in lost productivity. Not to mention the damage to one’s psyche for enduring a horrible day at work.

As leaders, we need to take the bad boss reality to heart and set our sights on creating a workplace where great bosses teach, inspire, and nurture employees so that they want to give us their best. Their best motivation. Their best productivity. Their best attitude. Their best work.

This is why I am a strong proponent of servant leadership. Servant leaders are not perfect, but they aspire to be great bosses. They want to serve the people well. Based on research published by Robert C. Liden of University of Illinois at Chicago, there are three things servant leaders do that matter to employees:

We read these researched observations and say to ourselves, “Of course, that has been my life experience.” But have you taken any action to ensure the leaders in your organization are becoming great leaders?

I challenge you to examine the leaders in your organization. Are the people they serve better off because of their leadership?  (paraphrased from R. Greenleaf)

If the leaders in your organization do not evidence servant leader qualities to their team, who will? And if they aren’t great leaders, they not only undermine your principles and underperform, but the statistics say they are pushing people out the door.  Don’t be the last to figure out what bad boss reality is doing to your organization.

Great bosses define what great leadership looks like. They set expectations and they hold leaders accountable.

Let’s create a great boss reality for our people. And if we do, how will the business perform?  The sky’s the limit!